Buy a House on Amazon

The latest offering is a 3 bedroom, 2 bathroom home. Titled “The Cliff” and manufactured by Estonian wooden structure distributor Q-haus, the property, which boasts an open kitchen, dining room and sauna, dwarfs the guest houses and backyard pool cabanas that previously sold on Amazon.

The home weighs 44,000 pounds and arrives in two modules that can be assembled by “two skilled workers,” according to the listing.

Furniture and appliances are also included.

While the home is currently unavailable on Amazon (without a timeline on when it will be), the notion is that interested buyers will be able to add it to their cart and get it delivered. According to Q-haus, buyers sign a contract of purchase, after which it will take approximately 3 months to produce and ship. The house has been designed by architect Kertti Soots and went up on Amazon last week.

Currently, Amazon offers an array tiny homes on its site, including a build-it-yourself garden house and a 12-foot transparent igloo dome. Due to the uniqueness of these designs, the homes are typically ordered on demand rather than kept in stock. 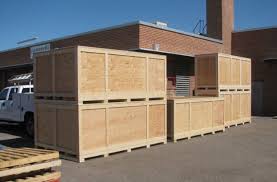